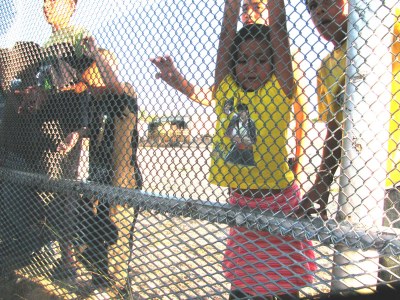 The image that haunts me from my Fall Break Service Trip to El Paso, Texas is that of the little girl speaking to us from beyond the wall. When we approached the border fence on the outskirts of El Paso a group of children materialized within a few moments asking us for money. Thirty feet south of the fence sat a ramshackle collection of cardboard hovels occupied by entire families, often two or three generations to a shack. She and I were only a foot apart but the gulf between us was occupied by failed government policies, miscommunication, and a lack of understanding on both sides.

It was the little girl in the yellow who approached me first, asking for money and nothing else. In my broken Spanish I attempted to ask how she was doing and what her name was. But she just repeated “dollars, dollars, dollars.” A sense of discomfort washed over me as I realized we were communicating at two different levels. And I turned away.

That turning away is what stings the most. Instead of confronting my own discomfort, I turned away. I was the rich man in Gospel who asks to follow Jesus. But when Jesus tells him to give up all his worldly possessions, he turns away. That afternoon at the border I was confronted with the face of Christ in the eyes of a poor child, and I turned away. It is this experience that reminds me, as find myself in uncomfortable situations, to confront them and not turn away.

For more information the border and how you can travel to El Paso to immerse yourself in the debate visit Casa Puente’s website. West Gosgrove was our host and his organization provides a life-altering opportunity for those interested in learning about border issues.

A group of students trying to figure out how to act justly, love selflessly, and walk as humbly as possible. View all posts by cucortinacommunity

I really need to find…