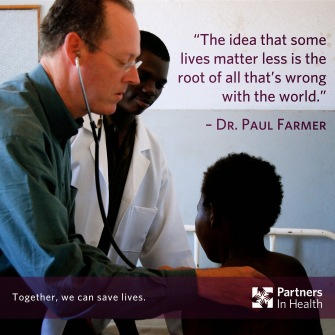 is an American physician and anthropologist, born in Massachusetts and educated at Duke and Harvard. Farmer is a professor at Harvard, attending physician of internal medicine, and his closest friends include the current president of the World Bank, the UN Secretary General, and the governors of multiple states. Sounds like a pretty well-to-do, high-and-mighty sorta guy, doesn’t he?

Partners in Health, originally founded by Farmer in Haiti but now expanded to operate in 10 developing countries and multiple Native American reservations, is an amazing organization that allows Farmer and his team to make huge changes around the world. Farmer’s main goal is advocating for health care as a basic human right and insuring that no one dies a “stupid death of a treatable disease.” More than that, Farmer uses his high-up connections to advocate for systemic change in health and governmental systems, teach about healthy living, and changing stigmas of mental health.

Farmer’s credentials could fill pages, his achievements are those people long for, and his impressive work brings a new meaning to “be the change you want to see in the world.” But the bottom line is, behind the company Farmer created, behind the impact he’s had on so many people, Farmer is the definition of a liberation whatever:

Farmer operates under the thought that there should be a preferential option for the poor. Simply put, those of us who have the means to do something have an obligation to do something. Being a “social justice hero” is all about doing exactly that. We don’t all need to become a doctor, and award winner, or even Harvard educated. Rather, we take what we have, and, as Farmer puts it “simply ask what you can do, then do it.”

I really need to find…